It has been 22 years since the first professional boxing event took place in the UAE. It was at the Aviation Club Tennis Centre (now the Dubai Duty Free Tennis Stadium) that ex-super middleweight champion Chris Eubank knocked out unheralded Colombian Camilo Alarcon in the fourth round – claiming the final victory of his boxing career.

But while Eubank has remained a frequent visitor to the UAE since, professional boxing has not.

Despite a lack of pro events, Dubai and Abu Dhabi have been mentioned frequently as destinations for high-profile fights, with the likes of Amir Khan and Manny Pacquiao notably angling to box in the emirates. Time after time, however, boxing fans have been left disappointed.

That could be about to change.

Former two-division world champion Badou Jack has found himself increasingly at home in the UAE, regularly spending downtime between fights in the emirates. The Swedish-born, Las Vegas-based fighter was even a guest of honour at the 2018 Dubai Fitness Challenge.

A devout Muslim, Jack has built up a strong following in the region – thanks in no small part to his charitable Badou Jack Foundation. After a brutal recent bout with Marcus Browne, he commented: “The fight that refugee children fight every day is much tougher than the fight I just had.”

Now, Jack and his business manager Amer Abdallah – a Bronx native and former kickboxing world champion – are aiming to ignite a boxing fire in the region. The first ever event held under the newly created Badou Jack Promotions lands at the FIVE Palm Jumeirah Hotel on May 3 and Abdallah feels it could be a springboard for Middle East boxing.

“This is the groundbreaking event,” Abdallah tells Sport Industry Insider. “It is an event that, when it works, we can roll out successfully around the Middle East. We’ve already had a call from Saudi Arabia saying they want this in the Kingdom too. I believe we can deliver quality entertainment to the United Arab Emirates and the whole region.

A burgeoning boxing scene already exists in the UAE thanks to dedicated gyms like Round 10 and Real Boxing Only, though genuine exposure has been difficult to come by. In contrast, Jack and Abdallah’s event is set to be streamed live on Fight.tv, reaching 175 countries worldwide.

“The local guys here are awesome and it’s great to see them building boxing. There are some foundations already and now we are looking to lay more, make the scene stronger. We’ve had nothing but love from everybody here, it’s been phenomenal. With the local clubs, everybody’s got their guys that they want to put on. On May 3, we will have fighters from Jordan, Palestine, Iran, Dubai, Abu Dhabi. It has to start somewhere; we are looking at a 500-person event and then building it out from there.

“We made the decision that because there is not a big enough dedicated boxing audience here yet we would make it a hybrid event with kickboxing and MMA fights too. Still, this is just the beginning.”

Among those 500 spectators will be rappers, boxers and big-name social media influencers, with Jack and Abdallah recognising that marketing the event well is key.

“Badou and I were in Manchester last year and saw 22,000 people watch KSI fight Logan Paul. Imagine, a fight between two YouTubers and it broke pay-per-view records. We’ve teamed up with ITP Live here and are working with a lot of influencers to promote the fight.

“They love what this represents. It represents a great evening of combat sports and entertainment. It’s a win-win situation for the region, for the athletes, for the promotion, for the hotel, for Dubai, for tourism – for everyone.

“It’s not just a fight, it’s an event. KSI is coming in for the fight, obviously Badou Jack will be here. Mo Vlogs will be here, Omar Borkan. We want to do is bridge the gap between entertainment and combat sports.”

British boxer Viddal Riley, who trained KSI for his fight with Logan Paul, is headlining the event – taking on Dubai-based Iranian boxer Mo Ali Bayat. Majid Al Naqbi, an Emirati, will also feature, as well as martial artist and YouTuber FaZe Sensei, who is making his professional debut. Former light-welterweight champion Amir Khan will also be in attendance and a representative from his boxing academy in Pakistan is slated to fight.

So with the event just a month away, why does it seem Badou Jack Promotions is ready to succeed where the likes of Khan and Pacquiao have fallen short?

“I think finance had a lot to do with those fights not coming off,” Abdallah says. “We are lucky as we have Aloki [Batra, CEO of FIVE] who has basically said, ‘whatever you need, we’re going to make it work’. You need firm backing like that to push it over the line. We have other great sponsors too and are about to secure an airline partner to help with flights. 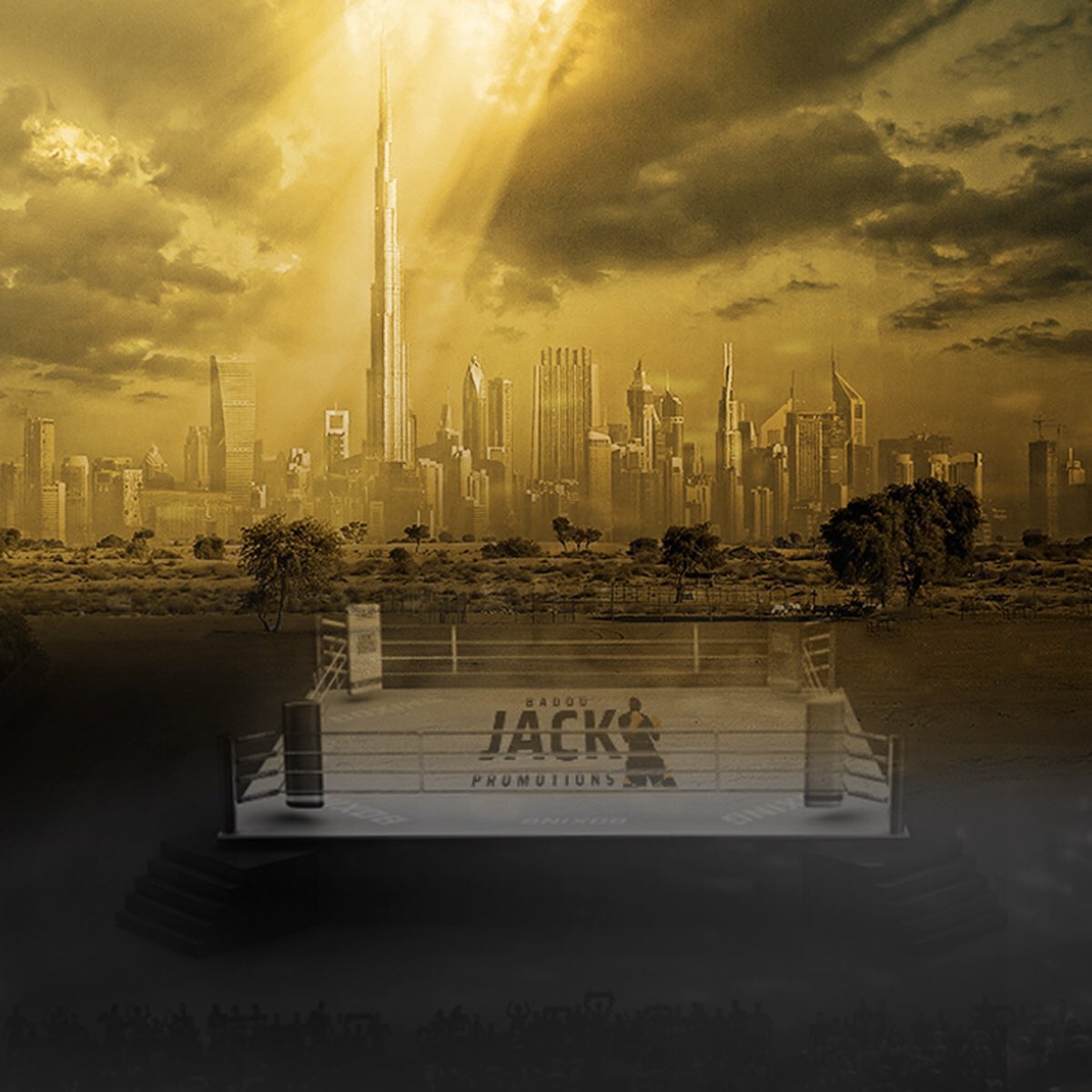 “But more than money, I think it is the logistics here. Getting permits approved, licenses signed. You need someone on the ground level to steer this. It’s not like going to the UK or US. There, they grab you by the hand and give you the promoters checklist. Here, we are basically writing that checklist from scratch!

“Maybe that scares away big promotions. Maybe they come in and they say, ‘there’s not a sanctioning body, there’s not a commission’.  But there’s also a big upside to that. Because it’s brand new, we can set the bar and show them how it should be done.

“There isn’t clear regulation yet but it’s definitely coming. We had a great conversation with the United Arab Emirates Boxing Federation, and they were very supportive in what we wanted to do.”

The hype is building around the May 3 fight night and that means expectations are high and the pressure is on for Badou Jack Promotions to deliver. Should they pull it off, Abdallah feels his friend and business partner could yet be the first boxer to fight for a world title in the UAE.

“A world title here would be a real game changer. It has to start small but once this event happens and, god willing, is successful, our goal is to bring Badou to fight here. That could be as soon as the end of this year. Obviously he still fights under Mayweather Promotions and they’ve been keeping an eye on what we’re doing.

“We’ve been supported in everything we do by them and we’ve been talking regularly. If we make this work, they will be interested too and if you bring in a name like Mayweather Promotions to this region and Floyd backs it, then it totally takes off.

“Their front runner here is Badou Jack, a Muslim who’s got his feet on the ground and people behind him. It has to start somewhere.”

Want to join the discussion?
Feel free to contribute!